Just in time for the holidays, in this installment time we’re going slightly further back into the past than usual to revisit an incident that that took place 101 years ago in Northern Tyrol, in an inn above the Tyrolean capital of Innsbruck. In general, Christmas of 1918 was a mostly somber affair in Northern Tyrol, for Tyrolians, like most former Habsburg citizens, had much to mourn. The previous four and a half years of continuous war meant that thousands of fathers, sons, and brothers who had left to fight had never returned, food supplies were low due to a collapsed local economy and the effects of military requisitions (see the previous blog on Northern Tyrol), and the armistice reached less than two months ago ending the war with Italy had led to the complete occupation of South Tyrol below the Brenner Pass. On the other hand, the end of 1918 left some reason for optimism: the long-sought peace and end of the war had finally come, a German-Austrian Republic (which Tyrol had joined provisionally, or more committedly, depending on whom you asked) had been proclaimed, and the Italian (and Entente) occupation of Northern Tyrol had proven to be rather light, and actually helped with the dire supply situation. So, despite the fact that wartime conditions, in material terms, persisted for many, there was, indeed, something to celebrate, at least for those who had the means to do so.

It was under these circumstances that two groups of revelers—Italian officers from the local occupation force and a number of local Innsbruckers—found themselves in the Mariabrunn Hotel, located on the Hungerburg overlooking Innsbruck, on the evening of Christmas Day, December 25, 1918. [1] The group of 20 Italian officers, accompanied by two soldiers as cooks, occupied a side room, where they held a festive Christmas dinner. In another room, separated by the kitchen, a celebration of local Innsbruck residents was under way, complete with eating, drinking, and dancing—all at a time when, as mentioned, rationing ruled. For the evening, though, it seemed that Christmas spirit allowed for some of the present ills be temporarily forgotten. 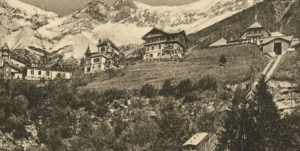 Image 1: The Hungerburg above Innsbruck, as seen from a 1928 postcard. The Hotel Mariabrunn is on the far left. Österreichische Nationalbibliothek, Ansichtskarten Online.

Trouble began to brew, however, around 11 o’clock that night, when a certain Johann Reitmair started making a scene in the larger hall, cursing other patrons and stealing their food and wine. According to the later gendarme report, after the other guests finally had enough of Reitmair’s antics, he was forcefully “removed” from the inn with the assistance of a 19-year-old Volkswehr member, Rudolf Penz.[2] In the commotion, the two Italian soldiers—the cooks for the officers—allegedly tried to assist Penz in giving Reitmair the boot. Penz, who was also a military veteran, apparently mistook their willingness to help for an act of aggression and drew his bayonet. Somehow, a struggle over the bayonet developed, during which one of the Italian soldiers retreated back through the kitchen to alert the room full of dining officers. One of these Italian officers, Lieutenant (Oberleutnant) Artoni, came back through the kitchen to investigate and, on entering the hall, happened upon Penz, standing steps away with his bayonet at the ready. Before Penz could move, Lieutenant Artoni fired a shot from his pistol, dropping Penz to the floor.

With that, the “excesses” on the Hungerburg seem to have come to an end for the night. An on-hand doctor treated Penz before he was taken to a local hospital. Besides some property damage, only two other notable injuries were reported: one of the Italian soldiers suffered a small wound to the head (either from Penz’s bayonet or from a chair wielded by another guest), while a former Austrian officer had apparently been struck near the eye in the struggle to eject Reitmair from the inn. Likewise, witnesses could not agree if Penz had lunged at Lieutentant Artoni before he was shot or not.

In the follow-up report to the Italian occupation command, Landeshauptmann Josef Schraffl attributed the events to alcohol and noted that they completely lacked any “political character,” and the few newspapers that covered the incident also characterized it as an alcohol-fueled misunderstanding.[3] In doing so, regional authorities and the local press failed to give life to two small details included in the gendarme report that had the potential to generate a larger scandal. After being shot, Penz had apparently called out: “German Austria, help me yet to kill the Katzelmacher!”—a possible reference to continuing wartime animosities.[4] Additionally, a young woman who apparently knew Penz had allegedly yelled, “Up with Italy, down with Austria!” during the fight, and earlier had danced with Italian officers, perhaps stoking Penz’s jealousy. In any case, with more important things happening across Europe (and perhaps the presence of an Italian censor), the flames of nationalism in Tyrol were harder to feed.

Of course, this did not mean the end of the affair from an administrative and judicial standpoint. Once the Italian Military Command was informed of the incident, it insisted that an Italian military court prosecute the suspects. Internally, Tyrolean provincial authorities questioned “if the [military] command is justified in claiming jurisdiction over Austrian citizens in Northern Tyrol.”[5] In his response to the commander of the Italian Army stationed in Innsbruck, Landeshauptmann Schraffl assured that while Penz was in no condition to be arrested, the drunken Reitmaier, who had started the whole chain of events with his unruly behavior, would face severe punishment, promising that “all the responsible authorities will for their part take all measures to punish the guilty to the highest degree and to give a deterring example against these kind of disturbances to public order.”[6] (The Italian military command was, as can be imagined, none too satisfied with this response.) 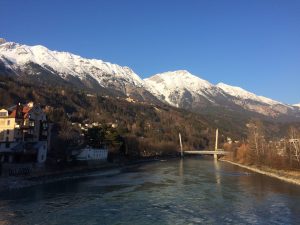 Image 2. The Hungerburg over Innsbruck today. The Mariabrunn Hotel, in yellow, was reconstructed in a modernist style by the architect Siegfried Mazagg in 1931 following a fire. Author’s photo.

Although the tragicomic story of the Christmas 1918 on the Hungerburg ends here—unfortunately, I am uncertain of the outcome of the legal process of early 1919—it serves as the beginning to another story: that of Rudolf Penz’s checkered and violent engagement as a paramilitary leader in Northern Tyrol. Penz apparently was able to recover from his wounds and, shortly after, became part of the small force of Tyrolians who served as Freikorps mercenaries on the territories of the inchoate Baltic states, fighting for various warlords from 1919 to 1921. On returning to Tyrol, he joined Richard Steidle’s paramilitary Heimatwehr, and eventually came to lead a division, the Gausturmkompagnie Hötting, which became known as the “Penz Platte,” or “Penz gang,” after Rudolf and his brother Heinrich.[7] The Penz Platte was notorious for its brutal street-fighting tactics, employed not only against Social Democrats, but also against National Socialists, especially after the Nazi swell in support in 1933.

It was Penz’s involvement in the assassination of a local National Socialist leader, Josef Honomichl, in the wake of the attempted Nazi putsch attempt and the assassination of Austrian Dictator Engelbert Dolfuss on July 25, 1934, that eventually led to Penz’s own demise. Shortly after news of Dolfuss’s death spread outside of Vienna, the Penz Platte, on its own initiative, took a number of local National Socialists hostage. Although most of the hostages were quickly released, of them, Honomichl, was killed, allegedly by the order of Rudolf Penz.[8]

The Heimatwehr, which had grown into a political force in its own right at the end of the First Austrian Republic, lost influence in Dollfuss’s and his successor Kurt Schuschnigg’s “Corporate State” (Ständestaat) and was gradually integrated into units under central state control, such as the Border Militia, before being dissolved in October 1936. However, Penz’s actions from July 1934 were not forgotten by the National Socialists. Shortly after Nazi German troops entered Innsbruck in March 1938 as part of the annexation of Austria to Germany, Penz was arrested and charged with ordering the murder of Honomichl.[9] On June 30, 1939, Penz was found guilty by the High Court (Schwurgericht) in Innsbruck and sentenced to death via beheading. After a failed appeal, Rudolf Penz was executed at Mauthausen concentration camp on December 13, 1939.[10] Thus ended a life that, without speculating too widely, seems to have been framed by the experience of the First World War, but never quite aligned with any of the ideologies or political programs—various nationalisms, Social Democracy, National Socialism, or clerical fascism—that promised solutions to the problems of the war’s aftermath.

[2] The Volkswehr was an official paramilitary force formed by the German-Austrian government and various provincial governments to help ensure order in the wake of the Imperial and Royal Army’s dissolution. While it developed a reputation for being politically left-leaning and representing the Social Democratic Party, at least at its formation, it was more ideologically heterogeneous. In Innsbruck, at least, its members were drawn from soldiers serving in the military garrison during the days of imperial collapse in October 1918. See Verena Lösch, “Die Geschichte der Tiroler Heimatwehr von ihren Anfängen bis zum Kornneuburger Eid (1920-1930)” (PhD diss., University of Innsbruck, 1986), 6–7.

[4] Katzelmacher was, apparently, a pejorative term used by German speakers in Tyrol for Italian speakers.

[5] Furthermore, drawing on an international and Austrian imperial law (R.G.Bl. Nr. 174, 1913), the official questioned if Northern Tyrol could be considered as “occupied” when only “certain strategic points” were under Italian control, and not the entire administration of the province.

[7] On Penz’s post-war activities, see “Tomaschek und Penz geständig—Martin leugnet,” Innsbrucker Nachrichten, November 21, 1938, p. 5. The “facts” portrayed should, of course, be taken with a grain of salt, considering that by this time the Innsbrucker Nachrichten was “synchronized” as an organ of the Nazi Party.