The Establishment of a New Border

When the short-lived Western Ukrainian People’s Republic, which claimed the Ukrainian-inhabited territories of the former Habsburg Monarchy, was militarily defeated in summer 1919, a new border was established. As Romania annexed Bukovina and Poland took control of Galicia, the former borderline between the two Austrian provinces became the Polish-Romanian state border, despite the fact that the incorporation of the Eastern Galician territories into the Polish Republic was yet to be internationally recognized.

The Polish-Romanian border came under strict surveillance especially on the part of Romania. The aim of this border control was not only to prevent smuggling, but also to inhibit the political influence of Galician Ukrainians on the mainly Ukrainian-inhabited border region of Bukovina. Fearing attempts at Ukrainian independence, the Romanian government imposed emergency rule in the border region for several years.

In contrast to relations with the other neighboring states that were dominated by border conflicts, Poland’s political relations with Romania were actually quite good. The two states had cooperated in the Polish-Ukrainian war in Eastern Galicia, shared common interests in the fight against Soviet Russia, and cooperated at the Paris peace conference in 1919. Nevertheless, conflicts occurred at the Polish-Romanian border at a local level. However, tensions between Polish and Romanian state authorities were just one aspect of these conflicts. The situation at the border was much more complex.

Relations between the Local Population and State Officials

In the early 1920s, Polish authorities received several complaints that illustrate the tensions between the various actors at the Polish-Romanian border. One important site of these tensions was in the relationship between the local population and border officials. Appeals to the district authorities as well as press reports in local newspapers expose these sources of friction: locals complained about tactless behavior by Polish officials towards the civilian population, and alleged the abuse of authority, which included bribery and illegal requisitions of food, essential goods, and wagons or horses from the local population. 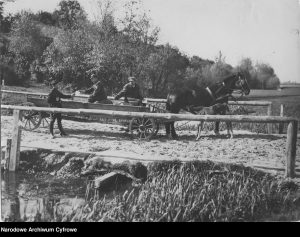 But accusations against Polish officials occurred too often to be considered completely unfounded. Polish district authorities were concerned about these allegations: improper behavior by officials would harm the reputation of Polish rule, which was all the more important in such a sensitive region as the Ukrainian-inhabited borderlands. One reason for the conflict between the local population and state officials may have been opposition to Polish rule in the Ukrainian territories. On the other hand, local Polish newspapers also complained about illegal requisitions by Polish officials. Thus, requisitions seemed to stem from state officials’ lack of discipline and can be seen as an aspect of continued wartime practices in peacetime.

In the summer of 1923, Polish authorities in Kosów (ukr. Kosiv) district, a mountainous region at the Romanian border, received frequent complaints from the local population and other Polish officials about “robberies” by Romanian soldiers. Romanian border guards allegedly crossed into Polish territory and abducted cattle from Polish citizens at pastures near the border, often hassling and threatening the shepherds in the process. The district administrator of Kosów demanded strong measures against the Romanian perpetrators. He argued that these incidents gave rise to bitterness among the locals and that their anger would also be directed against the Polish authorities, who did not defend them. Moreover, border violations were a matter of the authority and sovereignty of the state. He considered border crossings by Romanian officials to be illegal, all the more as the Romanians did not allow Polish citizens who owned land on the other side of the border to cross this dividing line. Thus, he gave instructions to disarm and arrest Romanian soldiers that ventured into Polish territory.

Polish-Romanian relations took a turn for the worse when a Polish customs official who attempted to arrest a Romanian official was murdered. After appeals to the responsible Romanian authorities to prosecute the Romanian perpetrators and prevent further delinquencies were in vain, the district administrator in Kosów asked for an immediate reinforcement of the Polish-Romanian border. While he pointed out that the Romanian border guard surveilled the border very strictly, he identified deficiencies of the Polish survey of the border that he linked to a serious lack of personnel: continuous surveillance by the state police had not yet been established and the customs guard had to fill the gaps in some places. However, besides resource constraints, a lack of cooperation between these two institutions—the state police and the customs guard—played an important role as well. 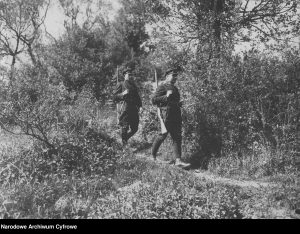 Tensions between the Polish state police and the Polish customs guard, which was established in 1922 at the Romanian, Czechoslovak, and German borders, came to light not only in the context of Romanian robberies. When locals complained about the illegal activities and abuses of power of Polish border officials, the two institutions often shifted the blame on to each other. For example, the commissariat of the customs guard in Horodenka rejected accusations against customs officials by pointing to misunderstandings between the local commander of the state police and officials of the customs guard. Instead of collaborating for the benefit of the state, the police commander had instigated the local population against the customs guard and pretended to be the only representative of state authority.

A contentious point was the question of if the customs guard had the right to search persons and houses in the interior. Officials of the state police classified these actions of the customs guard as an unlawful overreach of authority, and thus supported the common view among the local population that these actions by customs officials were arbitrary, thereby undermining the reputation of the customs guard. The communiqué, in contrast, underlined the competences of the customs guard, referring to its provisional regulations as well as to the Austrian law on the fiscal guard as the predecessor of the Polish customs guard. The fiscal office directed the district department of the state police to inform the relevant police stations about the content of this communiqué and command them to cooperate appropriately with the customs guard. As the fiscal office argued, the smooth cooperation between the two institutions was the precondition for a more effective surveillance of the border and for a complete halting of smuggling. Conflicts would undermine the authority of both state institutions in the eyes of the public.

Based on the available records, it is not possible to determine exactly which of the presented allegations were founded. Nevertheless, they illustrate the multilayered conflicts within this border region. These conflicts were closely connected to the establishment of a new border and the establishment of new state institutions. Notwithstanding internal conflicts among Polish state institutions, the reputation of the state among the local population was invoked as a crucial argument by all parties. A lack of discipline of state officials was considered a serious threat to the authority of the state. Thus, it was an important task of Polish authorities to come to grips with these conflicts in order to ensure an effective control of the border.