Police files can tell fascinating stories, even more when the local police operated in a former Hungarian port-city where a long and uncertain transition from the Habsburg Monarchy to new states was (un)resolved by the presence of an eccentric poet. Such is the story of a file entitled to Nicolò Dr. Sisa, containing, among other documents, the Passport (with a photo) issued to Sisa Nicolò, born in Papo in 1895, resident in Fiume, on April 1920.1 The document, Passport of the Military Police Office of the Command of the City of Italian Fiume issued by the Command of the Carabinieri in Fiume, enabled the owner to move inside the occupied zone i.e. the territory occupied by D’Annunzio. As was noted in red, the document did not allow traveling to Italy or to territories occupied by the Italian troops, outside Fiume, however such an additional permit could be written on the back and would be valid only for transit. The front page crossed out red note and the stamp above it, dated February 1921 Mattuglie (Croatian: Matulji, Istria), evidences that the Passport was used to travel outside Fiume. Turning the Passport, we find additional information on the owner’s journey. The day he received the Passport Sisa was authorized by the Command of the Carabinieri in Fiume to go to Naples for family reasons and return in sixty days. Two days later, the Passport Office of the Command of the Carabinieri in Sušak, a territory controlled by the Italian army and outside D’Annunzio’s occupied Fiume, authorized the same movement, limiting it to thirty days. Hence, the Passport presents in boring administrative language information on border controls, traveling limitations, and existing authorities in Northeast Adriatic’s postwar and provides an example of authorities’ misspellings and erroneous transcription of basic bio data. Rewriting the name and surname in Hungarian, correcting the birth date and the birth place of the Passport owner, and consulting the other documents of the police file, the monotonous information becomes a story that contributes to understand how post-Imperial Central-European networks were used. 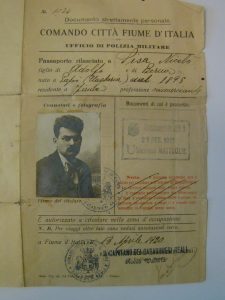 Nicolò Sisa (Pápa, Hungary, 1893 – Milan, Italy, 1927) actually Miklós Sziza or Mordechai Schischa, was a leftist pacifist law student, interested in psychoanalysis, and a pre-war leader of the renamed Galilei Circle. Sentenced in 1918 to two years of prison for pacifism, Szisza was released thanks to the creation of the Hungarian Republic.2 Contrary to Falzer and Brabant statement, Szisza did not emigrate to Palestine. As a member of the Socialist Party, Szisza joined the Hungarian Republic of Councils becoming, according to information of the Italian police of the fascist period, people’s commissioner and personal secretary of Bela Kun.3

How a Bolshevik ended up in Fiume?

Szisza’s presence in the city occupied by D’Annunzio is explained by his wife’s family. Júlia (Giulia) Szisza was born in Fiume in 1895, as the oldest of the six daughters of Adolf (Adolfo) Blüch, a trade agent of Hungarian Jewish origins, and Berta (born Spitzer), who settled in Fiume, the growing Hungarian port, at the end of the 19th Century.4 As member of the respectable bourgeoisie, Júlia was sent to study medicine in the Kingdom’s capital witnessing in 1919 the proclamation of the Republic of Councils. There, Júlia joined the revolutionary cause as her husband’s (they got married in Budapest in 1918) secretary. With the defeat of the Soviet Republic, and escaping from the White Terror, the Sziszas moved first to Vienna and then opted for Fiume where Júlia’s family lived. At least this is what the Italian police of the fascist period knew. According to the local police Inquisition from January 1920, signed by the lawyer “Nicolò dottor Sisa”, Miklós Szisza stated that he was working in Budapest as head of section of the Ministry for Public Assistance, subsection for the Infancy Protection during the Republic of Councils, until July 1919.5 On 11 July 1919, he moved with his wife to Fiume because Júlia was sick and pregnant, needing assistance that could not get in Budapest. Without precising when, Miklós Szisza declares that he was expelled from Fiume by the Interallied Command, the military authorities before D’Annunzio, but obtained a passport (a laissez-passer) from the Political Commission in Vienna and in the second half of September 1919 returned. Obviously, Szisza did not admit to the authorities his Communist inclination, but simply described his engagement in the Republic of Council, sustaining that his previous expulsion from Fiume happened without reason since he never did anything wrong. In Fiume Szisza stated he was not active in politics (“I am not in contact with anyone, thus I can neither carry out Bolshevik politics”6), dedicating himself to studying languages and waiting to start working as employee of his father in law. Additionally, Szisza explained that he requested a Residence Permit from the police which, we can presume, he did not obtain. Neither was his father in law’s letter to the authorities, written a month later, defending Szisza (his eviction is the consequence of slander from an adversary) with attached a medical certificate to prove bad health conditions and thus the need of employing Szisza for his company, was useful.7 The local authorities remained deft and Szisza was expelled from Fiume.

What about the Passport?

In April 1920, the city was for already for eight months under the control of the Italian “poet, seducer and preacher of War”8 Gabriele D’Annunzio and his followers. Since the plans of a forced annexation to Italy failed, in 1920 D’Annunzio and his heterogenous intellectual entourage turned to political experimentation trying to obtain Soviet Union’s recognition for the new course.9 So, instead of being sent to Hungary, by D’Annunzio’s personal intervention Miklós Szisza obtained a document for himself and Júlia to go to Ancona.10 In exchange, Szisza was asked for an opinion on the Carta del Carnaro, the new founding document of D’Annunzio’s corporate state, which Miklós, allegedly, evaluated to have some “admirable elements”.11 While that episode served to enforce claims that D’Annunzio’s occupation and political experimentations attracted also foreign left-wing supporters, Szisza presence in Fiume manifests the use of transforming social and state networks. Thanks to his wife, Miklós Szisza was able to enter the first time in Fiume avoiding the collapse of the Republic of Councils. Because of unsettled sovereignty and the confused situation, he could return in town in September 1919, establishing himself with his in-laws. Finally, by D’Annunzio’s alleged intervention, Szisza obtained a Passport as Fiume resident (though he legally did not have Heimatrech/pertinenza in Fiume), a document which enabled further traveling to Italy. Szisza was thus able to exploit his family networks as well as Fiume’s cultural and state position at the crossroads between Hungary and Italy to continue pursuing his political activity. 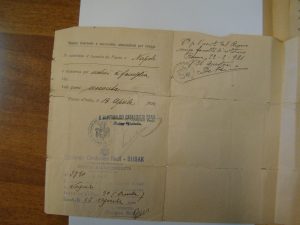 Contrary to the claim of the Italian police, Júlia Sziza did not join her husband on that April trip, she obtained a special passport, preserved in Szisza’s police file, at the end of October 1920.12 The spouses were together in Rome expelled from Italian soil on February 1921 arriving in Fiume through Mattuglie as the stamps on both of their passports shows. Their expulsion, motivated by political reasons, was revoked thanks to influential Italian socialists, so they were able to return to the Apennine peninsula.13 In Italy, both Miklós and Júlia Sziza first worked for the Embassy of the Soviet Union Embassy in Rome and later for the Soviet Commercial Agency in Milan. When Miklós passed away in 1927, Júlia Sziza continued her revolutionary path moving to Berlin. The scarce historiographical attention given to Júlia Sziza, and her mother and sisters, evidences the marginal role attributed to women engaged in the international communist movement. As neither Croatian nor Italian, and as a passionate Communist, her biography, as well as that of her husband’s, testifies of a crossroad and an overlap of cultures, languages, nationalities, and political ideologies between the Hungary, Central Europe and the Adriatic. A crossroad that slowly faded away but was not yet finished in 1918.