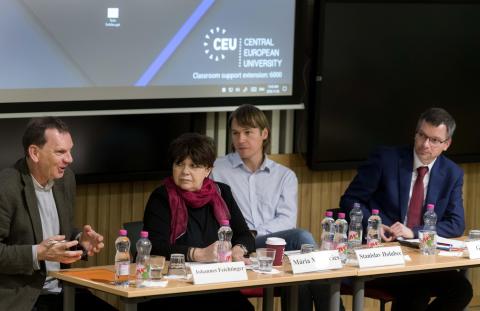 The year of 2018 marks the centenary of the end of the First World War when the principle of self-determination entered center stage and led to the creation of several European sovereign entities. This international conference centers upon the comparative evolution of the nation state – as both concept and lived-in reality – in contemporary Europe. It aims to offer a transnational perspective on anniversary events and discourses related to the end of World War, a nuanced account of new state formation in its aftermath and also contour new research trajectories. By focusing on reconcilliation, scholars and practitioners will discuss the trajectory of the nation state, since the Trianon Treaty and throughout 100 years of transformations, including but not limited to the effects of EU integration on re-shaping political communities.

This interdisciplinary conference was organized by the Center for Neighborhood Studies (CENS), at the Central European University in Budapest, Hungary, with the kind support of the Friedrich Ebert Foundation and in partnership with the Institute of Political History (Hungary). The conference was structured along a keynote lecture and 3 panels. 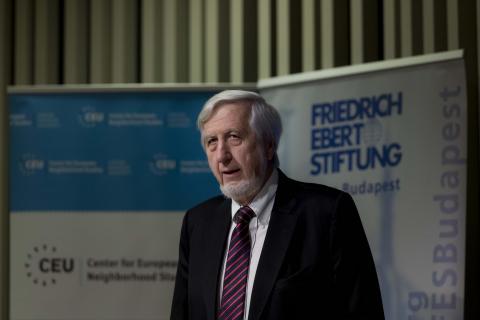 In this keynote lecture entitled Conflict and Reconciliation in Europe. Overcoming Memories of a Difficult Past, Géza Jeszenszky analyzes the outcomes of World War I from the perspective of new nation state formation, while also extending the analytical timeline to include most of the 20th century. The end of World War I had an intense emotional character, with humanity shocked by what it has gone through and promising to itself never to repeat it. The formation of new nation states was cause for celebration for the winners, and sorrow for the losers, but, even in the case of the former, the newly formed political communities were marred by internal turmoil and required careful management of minority issues. The Second World War and the Cold War did aggravate the status of minorities, especially in Central and Eastern Europe, where totalitarian governments placed significant strain on the population and curtailed freedoms dramatically. Eventually, the breakdown of communism and the EU and NATO integration of postcommunist states created the premises of cooperation between states divided by territorial borders encompassing uncomfortable configurations of minorities and majorities. Géza Jeszenszky ends his lecture by expressing doubts about the compatibility between the exclusive nation state and democracy, especially in the rather complicated landscape of East Central Europe. He argues that integration, the core concept of the European Union, and regionalism, can be the solution to end minority issues all over the post-communist space.

Panel I: Empires and nation states – a historical perspective 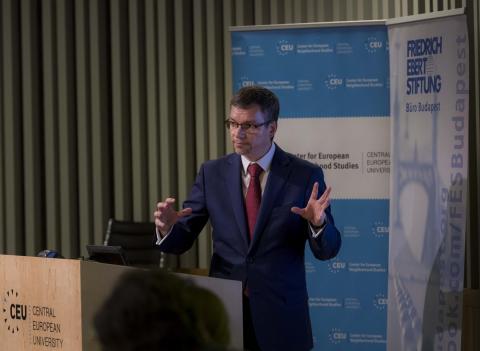 Formation of nation states as a result of collapse of empire creates the premise of perceiving said empires as typical structures of authoritarianism, often times perceived in a negative lens. Nevertheless, Gábor Egry suggests that a closer look at the Habsburg Empire reveals its rather modern and open approach to the core issue of multi-nationality. The disappearance of multi-national empires does not mean that the newly formed nation states break with their imperial states, but rather that a series of continuities guide and influence the latter in their trajectories. Among these continuities, associational life and public administration were prominent. Moreover, differentiated rule – often employed in new nation states – was also a continuity driven feature taken from the their imperial past, a mechanism allowing the new elites to handle wide disparities existing in their newly acquired territories. 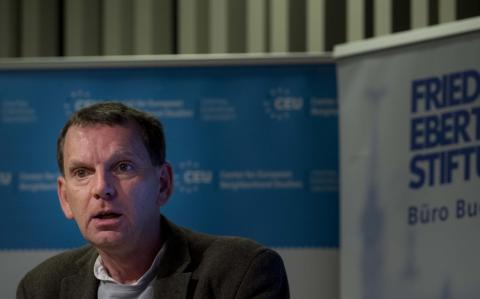 In his presentation (prepared in collaboration with Heidemarie Uhl), Johannes Feichtinger argued that it is not the past that changes but rather how it is approached. They discuss the intricate ways in which historiography changed the memory of the Habsburg Monarchy. Several features of the latter are discussed in detail: the structure of the multi-national empire, conceptualizations of nationality and the potential compatibility between a supranational order and democracy. The authors show that different traditions of research within history, and also in cultural studies or linguistics, allow for a reinterpretation of the Habsburg monarchy’s role in history and, indeed, may lead, to a recognition of the pivotal role of social and cultural transformations embedded within identity issues in Central Europe. 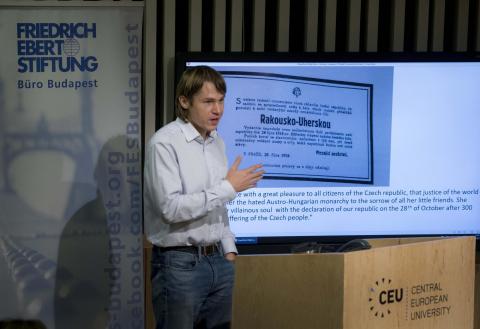 Stanislav Holubec analyzes discourses centered on understanding the past in the case of Czechoslovakia. He explains the tension between the national myth/myth of national construction and the myths of de-de-Germanization, de-Austrianization, de-Catholicization. The end of World War I created both continuities in the state structure (for example military and state apparatus personnel) and discontinuities (for example the new conceptualizations of public space and public holidays).

Panel II: The nation state in Eastern Europe after 100 years 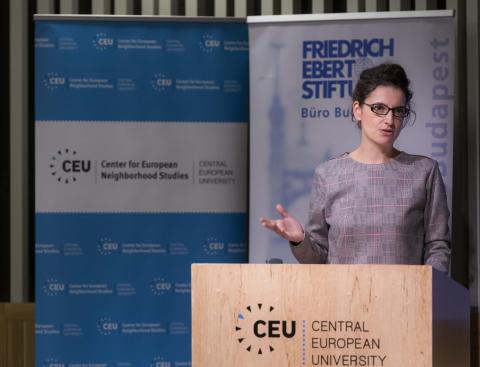 Reflecting upon the 100 years of nation state, Silvia Marton argues that, while many publications and events concentrate on (re)creating national histories of brave fighting against oppressors in order to safeguard national identity and the relatively new nation states, a process of historiographical renewal is also taking place. This process includes analyzing the formation of nation state from the perspective of diverse and previously ignored actors, such as women or peasants, and from wider angles that include constructions of political memory, anthropological accounts of political changes, or the relationship between intellectuals and scholars and political life. Against the nationalist trend of exclusively glorifying self-determination, there are ever stronger research initiatives focusing on the analysis of the year of 1918 as a time of negotiations and uncertain outcomes, rather than as the national culmination of national sentiment affirmation. Finally, and especially in the case of Romania, it is interesting to understand that the formation of Greater Romania implied hardships and challenges for Romanians as well, as the need to integrate different minorities and handle the new shape of the state was, at least, burdensome. 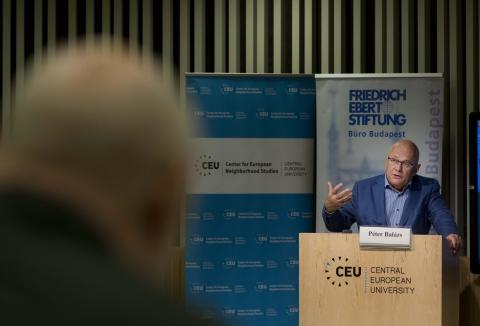 Péter Balázs starts his intervention by stating that there has not been a formal international treaty after the Cold War, which, potentially influenced national, regional and supranational developments all around Europe. Although issues between majorities and minorities exist throughout the European Union, there has been some remarkable progress, and the model of Franco-German relations in the last 60 years is for sure a marker of this progress. Reconciliation is not an easy path, but the European Union can be an accommodating framework to host advancement towards. 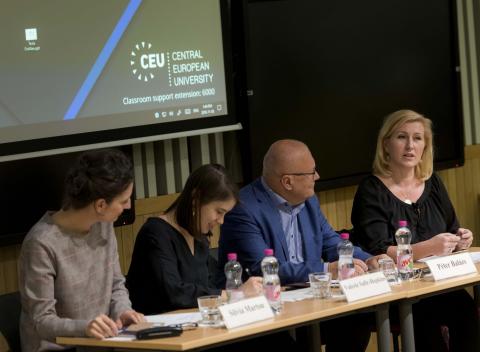 Dagmar Kusa analyses the formation of the Czechoslovakian nation and aims to present its (un)desirability from different points of view, especially those of minorities involved in the process, such as Hungarians and Germans. Not even Slovaks felt particularly at ease within the new, largely Czech, national project. The so-called “tragedy” of Central European histories, constructed around an inferiority complex and embracing an aura of victimhood, can be related to contemporary identity and political community issues in this space. In other words, exclusive understandings of “us” and the necessary rejection of “the other”, characterizing many societies in Central and Eastern Europe can be seen as the result of 100 years of history accentuating periphery, marginalization and colonial and imperial domination harming the national ethos.

Presentation of the ERC Nepostrans and the Trianon100 (Lendület Grant, Hungarian Academy of Sciences) projects 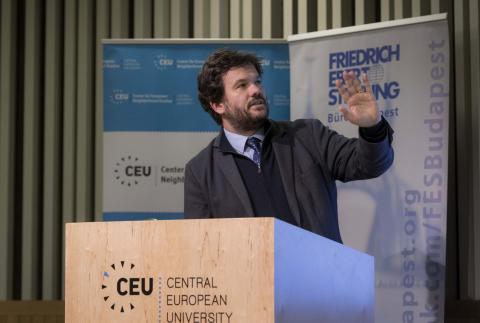 Balázs Ablonczy presented the Trianon100 Project which aims to publish documents of the Trianon Treaty and fill in the gaps in Hungarian historiography by bringing in previously neglected analytical perspectives, such as history of mentalities or social history, instead of political history. Also, the focus of analysis could be at the local level, understanding the effects of the end of World War I on everyday Hungarians of the time, while also including transnationalism in the analytical equation. Gábor Egry described the NEPOSTRANS Project, which offers integrated analyses of particular areas of interest before, during and after World War I. Those areas include state-society relations, economy and welfare, social status, violence and revolution and ethnicity.

Although 100 years have passed since the end of World War I, we have a duty – especially in post-communist countries – to permanently try to understand its consequences in terms of conceptualizations of political community, status and role of minorities, neighborhood relations, or our countries’ position within the European Union. A contextualized, nuanced, and time-sensitive approach to understanding the effects of the peace treaties (including the Trianon Treaty) in Central and Eastern Europe is not only a necessity for improving relations between majorities and minorities, but it may also be important in creating mass support for the European project.