“No district office or any other authority can command me, and you” [he said] pointing at the [Gendarme] post leader Vogel with his hand, “can lick my ass. Only the Lord God and I command, besides that there are no other authorities.”

It was with such an insult that the farmer Josef Pitterle sought to drive off the small group sent to collect one of his cows—his contribution toward fulfilling the livestock quota for the Tyrolean village of Außervillgraten in July of 1919. The farmer’s harsh words and refusal to cooperate with the authorities of the newly minted Republic of German-Austria reflected the general attitude of large parts of the Tyrolean population, who after the official end of the war and years of deprivation, as well as increasing government intervention into their livelihoods, found themselves to be increasingly worse off. Under such conditions, it did not matter to Pitterle, or to many others, that the dynastic empire within which he once lived had apparently become a democratic republic.

At the same time, the reaction to Pitterle’s intransigence by local officials, who, as we shall see, went to great lengths to ensure that orders were carried out, points to the considerable effort made by local actors to assert the rightful authority of the state following the chaotic days of October and November 1918. Even if the new state was legitimated on the basis of the “people” rather than the interests of the state or a monarch, defending this legitimacy required seeing that its directives were followed—even if this meant retrieving one cow hidden on a far-away meadow at the cost of minorly bodily harm (and perhaps greater damage to personal dignity). 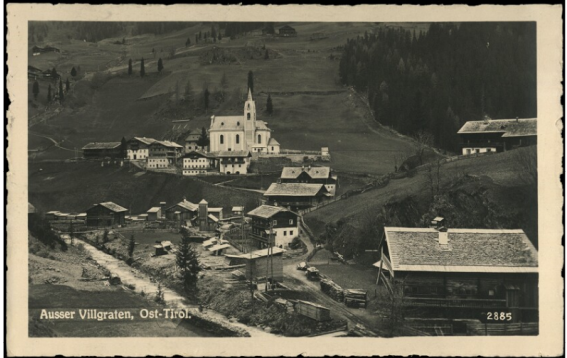 Raising livestock and especially cattle—used by Tyrolean farmers for dairy production, meat, and for export beyond Tyrol—had long constituted a crucial sector of the regional economy in pre-war North (and parts of South) Tyrol. Just as the entire economy of the Habsburg Monarchy, this regional branch was thrown into disarray by the outbreak of hostilities and military mobilization in July 1914. From the late summer onward, Tyrolean farmers, such as those of Außervillgraten,[1] were forced by the military (with the assistance of civil bureaucrats) to sell their livestock at low prices or face requisitions. Widespread complaints from farmers in response to perceived military overreach and mismanagement led to efforts at greater coordination by civil authorities in 1915, and a more organized system was put in place at the end of 1916, when a central controlling body, the Provincial Livestock Control Authority (Landesviehverkehrsstelle; or LVS), was formed to plan and carry out the mandated purchase of Tyrolean livestock. The LVS, like the other bodies belatedly created by the Habsburg government during the war, was intended to ensure that the meat consumption needs of both the k.u.k. military and that of Tyrol’s civilian population would be met. Just as with the other heavily criticized Zentralen that managed the distribution and selling of resources such as grain and flour, leather, and animal feed, the LVS was supposed to result in a more “fair” and equal sharing of the wartime economic burden. At the same time, however, it marked a yet another intervention into the lives of Tyrol’s largely rural population. Although farmers were compensated for their livestock, the payment was often delayed, and more importantly, farmers lost the ability to sell their animals at their chosen price, when they desired; instead, individual farmers were ordered to provide their animals based upon assigned local quotas. In essence, if a well-intentioned alternative to military arbitrariness, the LVS could also be seen as another cut into the guarded independence that served as a basis of the Tyrolean farmer’s self-image.

Recognizing how such a new, centrally directed system was likely to be seen as a threat by rural farmers and their political representatives, such as the Tyrolean Farmer’s Association (Tiroler Bauernbund), local authorities sought to reassure alarmed farmers by highlighting local participation within the LVS and appealing to imperial patriotism. Characteristically, a long article in the Christian Social Tiroler Anzeiger from early May 1917 written by a source with “good insight” into the workings of the LVS rejected accusations of it being a “war profiteer” and drew a line between it and the Zentralen. Rather, the article stressed that the LVS operated directly under the provincial bureaucracy (and was not enriching well-connected private entrepreneurs) and involved local mayors in planning and directing the collections. It ended with a paeon to the Tyrolean farmer, who was “far beyond the valleys of the homeland justifiably renowned as loyal to fatherland and emperor.”[2]

Even with the work of the LVS, Tyrolean cattle herds were critically thinned between 1915 and 1917. By 1918, the combination of military and civilian consumption, a tendency to compensate for the failing supply of grain with meat, and continued military requisitions outside the purview of the LVS resulted in a deeply felt shortage of livestock in North Tyrol. This precarious economic situation outlived the empire: with the collapse of the Habsburg Monarchy and the proclamation of the Republic of German-Austria in November 1918, the shortages remained. So did the organs of the centrally directed provincial economy, including the LVS, which was carried over by the newly republican provincial government based in Innsbruck. 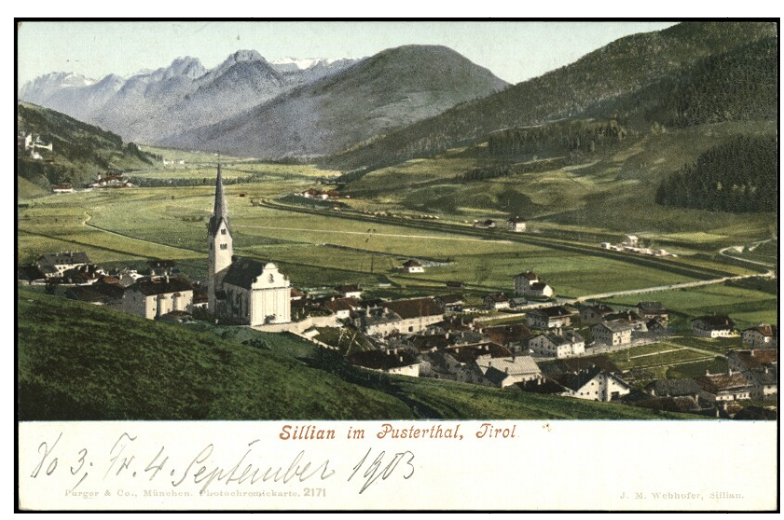 And this is where the Außervillgraten farmer, Josef Pitterle, enters the picture in the summer of 1919. Pitterle was one of a handful of farmers who was ordered by the Außervillgraten municipal leadership (Gemeindevorstand)—under direction of the LVS—to provide a total of 2000 kilograms of livestock for the nearby city of Lienz on July 14. Although all villagers initially failed to comply with this order, the other farmers acquiesced after it was reissued (with the threat of gendarme involvement) on July 17. When Pitterle still did not appear with his cow, however, a municipal council member, joined by two gendarmes and a local herder, made their way to Pitterle’s farmhouse. According to the gendarmerie report, there they found the defiant Pitterle, who declared that, as he had only three cows and 12 people in his household, and moreover needed the cows for their milk, he would not give up any for slaughter. After the gendarmes once again demanded, “in the name of the law,” that Pitterle turn over his cow, Pitterle dropped his offensive line and stood his ground.

The cow in question, meanwhile, was nowhere to be found. According to the gendarme report, Pitterle had expected the visit and driven his entire herd of three cows to a high mountain pasture early that morning. Only after a three-hour hike, in which one of Pitterle’s teenage sons was apprehended on the way—apparently intending to hide the cattle in a nearby forest—did the small group reach the pasture and take possession of the highly contested cow. Yet that was not the end of the trouble: on the steep path down to the village of Sillian, where the cow was to be delivered, the cattle driver, a Josef Oberwasserlechner, was, “because of the cow’s wickedness,” flung against a tree, causing him to seek medical attention. The gendarmes also had a hard time on the return down the mountain, being “thrown multiple times to the ground.” All this time, Pitterle himself had apparently gone to Sillian, where he ridiculed the herder and gendarmes, betting anyone who would listen that the group would not be able to make it back with his cow.

On the one hand, Pitterle seems simply to have been a stubborn individual, someone who was known to cause problems for the officials. The gendarme report describes how he “revolted against any authority” and notes that he had been previously convicted for failing to follow regulations preventing animal diseases. On the other hand, both Pitterle’s defiant resistance and the persistence of the local agents of the LVS speak to some of the greater stakes that may have been at play in this one situation. For Pitterle, the LVS orders taking away his cow may have been the last straw. Although the gendarmerie report does not reveal what Pitterle’s wartime activities were, it is safe to assume that the war had a decisively negative impact on Pitterle, his family, and their small farm. Thus, in the face of orders issued by far-away bureaucrats, his profane appeal to higher orders of legitimacy—rural self-sufficiency and the supremacy of God—can be seen as a questioning of the rights of the state and its agents.

Viewing Pitterle’s noncompliance as a challenge to the authority of the state would also help to explain some of the doggedness of the small group acting on behalf of the LVS in retrieving this single, mean-spirited cow from a high and distant mountain pasture. This group was acting on orders to feed the larger, more urban Lienz, where the nutrition situation was even poorer than in the countryside. (The funneling of food from rural farmers to town and city residents did no help, of course, with long-standing urban-rural antagonisms.) But beyond maintaining the food supply—and perhaps not letting the rude Pitterle triumph after his insults—the ability of the LVS agents to bring down this one stubborn cow reflected on the capacity of the provincial government, and the viability of German-Austria. While neither the gendarmes nor the local municipal official were “bureaucrats” themselves, they took their orders from a body that, in the continued spirit of Austrian “dual track” administration, combined appointed officials with elected representatives. In the small village of Außervillgraten, this small group became the defenders of the state’s prerogative at a time when, based upon Pitterle’s ridicule and resistance—which was to be found in many similar cases across North Tyrol in the first post-war summer of 1919—the actual reach and durability of governing institutions were still very much in doubt.

[1] The village of Außervillgraten is located off of the Pustertal in an eastern region of Tyrol, which had been included in the area known as South Tyrol, but was (mostly) not claimed by Italy after the First World War. This area, which administratively still belonged to Tyrol but was largely cut off from Innsbruck, became known as East Tyrol (Osttirol).